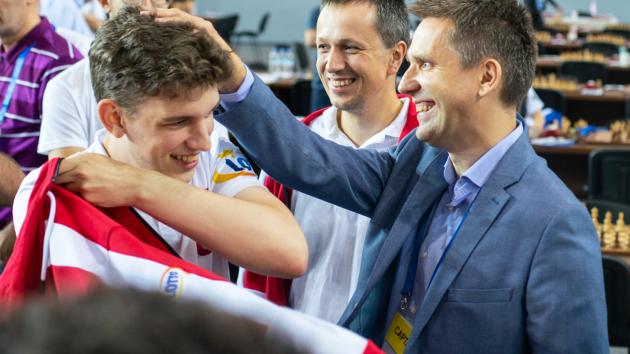 No matter the partner, Poland keeps polkaing. Other nations can't keep up.

Today the surprise of the 43rd Olympiad took down number one seed and defending champions USA, 2.5-1.5. Poland is now all alone in first place, passing over the Americans (16 points to 15). Couple today's result with earlier upsets of second-seeded Russia and other top-10 seeds France and Ukraine (not to mention draws with Azerbaijan and Armenia) and Poland just keeps answering every challenge.

If the squad can keep it up, it may well be the most surprising team gold medal in Olympiad history. And they won't have backed into the victory. They've gone through most of the powerhouse teams, with China coming in round 10.

The match loss was the first for USA in an Olympiad since the final round in 2014 when it lost to Azerbaijan.

It was a new day and a new hero for Poland. In round nine, up stepped Kacper Piorun, who didn't need his five-time world problem solving championship credentials to beat Hikaru Nakamura. Instead, he bided his time and kept calm after being surprised with the Scandinavian, until the American opened the position.

Then the polka began, with his rook leading the way. Piorun's win proved to be the only one of the match.

The last time Poland won gold at an Olympiad, Akiba Rubinstein and Savielly Tartakower were playing for the team. Now 88 years later, it leads with two rounds to go. It might not have been so, however, if the world championship challenger had channeled some of Piorun's puzzle solving.

In the dwindling moments of the final game of both the match and the entire open section, Fabiano Caruana missed a win with rook+bishop vs. rook+pawn. Then he tried to save the match by gobbling the pawn and pressing for 50 moves. Jan-Krzysztof Duda, one day after finding a miracle tactic to save his game, also proved that he's solid at endgame fundamentals, too.

An important save for Duda vs Caruana. | Photo: Maria Emelianova/Chess.com.

Nakamura, whose game had long since ended, had stayed around his team until Caruana's game finished. He sat at an adjacent table, back to the match, alone with his thoughts.

For round 10, Nakamura was benched. In his six previous Olympiads he has never sat out any of the final three rounds, and has only been benched a grand total of once in those six Olympiads in the second half of the events (and that was against Macedonia in 2012).

Sam Shankland might also be thinking about what might have been. He sacked his queen on move eight and won many tempos, but couldn't play the hero again and he drew.

With USA stalled on 15 points, and now Poland even ahead, many of the 13-pointers took their chance to get back in the gold-medal hunt. Three of them did just that, and all benefited or outright relied on their fourth boards.

On match board two, China and Azerbaijan played three draws, despite Shakhriyar Mamedyarov putting Ding Liren's undefeated streak in serious jeopardy. Everything came down to the last board. That's where Bu Xiangzhi took care of Eltaj Safarli, who has only played four games thus far. It was Bu's second match-winning game in a row.

Armenia beat India in the exact same way. Three draws came, including a very quick one between Viswanathan Anand and Levon Aronian, and then relatively unheralded Haik Martirosyan continued his undefeated tournament by upsetting Krishnan Sasikiran for the only decisive game of the match.

Armenia's win puts them against USA tomorrow on board two.

Sneaking up the standings after being mostly lef t out of the reports on these pages is England. They are the final team on 15 points. And wouldn't you know it, the team also got a win on board four, although it also won on board three over Norway for a 3-1 win.

Gawain Jones' long struggle with a past Norwegian champion ended just before he got to mate with two pawns against a queen!

One of the biggest single-game upsets of the day was turned in by German number one Liviu Dieter-Nisipeanu who had a fun ending of his own in beating France's Maxime Vachier-Lagrave. It's a pity the public was spared of four queens on the board, which was actually the "cleanest" path to victory.

While all of the teams on 15 or 16 can still reasonably dream about gold, those getting to 14 may have to curtail their thoughts to lower podium positions. Leading the charge there is Russia. Their candidate got elected FIDE president, but most didn't know until well after since the team had long games.

At one point Russian Chess Federation President Andrey Filatov entered the hall looking to give them the good news to his players, but couldn't since they were all still engaged in their games.

Sergey Karjakin took care of business as Black on the top board, while Nikita Vitiugov nailed down the other end. Amazingly, that game came down to yet another pawnless ending -- queen versus rook. And just like Caruana-Duda, that ending was covered in the most recent ChessKid video released in the middle of the Olympiad!

Russia's win means it is possible that we may well get USA-Russia after al l, in the last round.

In the women's event, China grabbed the sole lead with a convincing win vs Kazakhstan. The top two boards ended in draws, but China was too strong on the remaining boards, where it could present two more 2400s, and its opponent couldn't.

WIM Gulmira Dauletova came well prepared in a Taimanov Sicilian, but her second move after leaving theory was a mistake. She spent 11 minutes on what turned out to be an incorrect pawn sacrifice, and another 48 after her opponent took it. GM Lei Tingjie then won a smooth game:

Lei Tingjie has just taken on g5 and is about to play Qa5. | Photo: Maria Emelianova/Chess.com.

Ukraine couldn't keep the pace; a match point was dropped after a disappointing 2-2 with Azerbaijan. The latter was lower rated on all boards.

Initially, GM Anna Muzychuk had given the right example with a crushing win with the black pieces.

On board three, however, IM Gulnar Mammadova levelled the score by beating GM Anna Ushenina. The former women's world champion was more than comfortable out of the opening, but then she allowed her opponent's rook to the seventh rank, and White's activity became too strong.

Ushenina: Better from the opening, but losing in the endgame. | Photo: Maria Emelianova/Chess.com.

Where their male colleagues failed, the U.S. women's team did manage to gain the double match points from their encounter with Hungary, but only after an absolute miracle save by GM Irina Krush. It was the last game still going in the playing hall, and if finished shortly after Duda and Caruana were done. We could have had two RB-R endgames.

Not a game IM Anita Gara will want to remember. | Photo: Mike Klein/Chess.com.

Chess.com's interview with Krush right after the game.

After two losses, WGM Tatev Abrahamyan recovered with two wins in a row. In this round (and thanks to Krush) her game, a model game for the 10.h3 Four Knights, decided the match in USA's favor.

Abrahamyan on her way to win a very important game. | Photo: Maria Emelianova/Chess.com.

There's all to play for as the USA team (who se FM Jennifer Yu secured an IM norm!) is now tied for second place with Armenia and Ukraine, a point behind China.

Armenia kept their Olympic gold medal hopes alive with a 3-1 win vs Iran. IM Sarasadat Khademalsharieh was hanging on well, but shortly before the time control she dropped an important pawn that broke down her kingside defense.

Russia, Azerbaijan and Georgia 1 can still fight for medals as well, being two match points behind China with two rounds to go. India could be seen as a dangerous outsider before the tournament, but they're definitely out of contention after a 2-2 with Italy.

Peter Doggers contributed to this report.

Chess Olympiad: Czechia Beats China, Poland Rolls On In Round 5